Who Needs the ABC? why taking it for granted is no longer an option

For the past nine years, the ABC has been besieged. Its funding has been slashed. Its staffing levels have been cut. It has been assailed by complaints from ministers and prime ministers. Its board has been stacked with a succession of political appointees. It has been relentlessly attacked by commercial media outlets. And it has suffered crisis after crisis.

Who Needs the ABC? charts how the best-trusted news organisation in Australia arrived at its current predicament- doing the most it ever has, with less than it needs, under a barrage of constant criticism.

This book examines the profound changes that have swept through the Australian media, technology, and political landscapes in the past decade, and explores the tense relationship between the ABC and governments of both stripes over the past 40 years. It dispels any complacency about the ABC's future by charting the very real threat now posed by the hostility of the Liberal-National Party coalition, and the damage that it has done to the ABC over the past nine years.

Amid this, Who Needs the ABC? identifies the vital role that the ABC has played and continues to play in Australia today- in its award-winning journalism, in its vast array of cultural programming on television, radio, and online, and the comprehensive service it provides, geographically and culturally, to people across the country.

At a time when the truth has to vie with obfuscation and misinformation, this book offers a rejoinder to the ABC's critics, points to a way out of the ABC's current predicament, and answers the question posed by the title. Who Needs the ABC? We do. 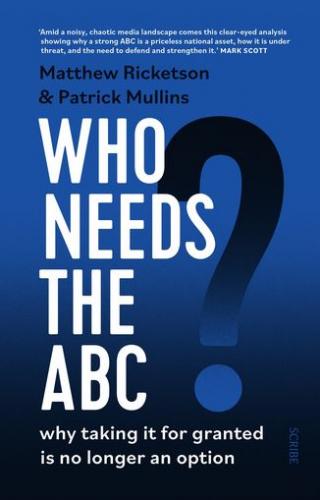