The War Game Australian war leadership from Gallipoli to Iraq

'Essential reading for anyone who wants to understand why Australia has made the decision to go to war - over and over again.' Professor Peter Stanley, UNSW Canberra

'The War Game is compelling. This is not a game.' Dr Brendan Nelson AO, President Boeing Australia, New Zealand and South Pacific

'A book of lessons for Australian political leaders on managing wars.' The Honourable Kim Beazley AC, Governor of Western Australia

Committing the nation to war is the gravest decision its leaders can make. The War Game examines why and how Australia went to war, and how it managed the nation's nine conflicts between the First World War and the Iraq War. It explores the relationships between some of the most dominant political leaders in Australian history - Billy Hughes, Robert Menzies, John Curtin, Harold Holt, John Gorton, Bob Hawke and John Howard - and their top military commanders, including William Birdwood, John Monash, Brudenell White, Thomas Blamey, Vernon Sturdee, Douglas MacArthur, Sydney Rowell, Frederick Scherger, John Wilton, Peter Gration and Peter Cosgrove.

The War Game raises important questions about the process of war leadership. Should political leaders leave the conduct of the war to their top military commanders or should they interfere? Have Australia's war leaders always made wise decisions? Given that Australia has always fought as a junior partner in a coalition, either within the British Empire or as part of the US alliance, how should Australia's leaders manage these alliance arrangements? And how should Australia's future war leaders prepare for the tasks ahead?

Ultimately, it is the soldiers, their families, and the people of Australia who bear the burden imposed by the decisions of the war leaders. Based on exhaustive research, The War Game is about the greatest challenges likely to face Australia's leaders. 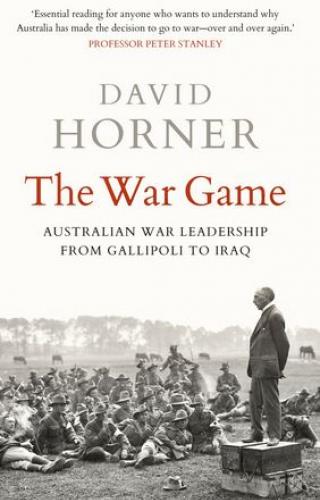