It's a cold and wintery night in 1968 and ten-year-old JJ's mother isn't home. The cows are milked, the pigs fed, and her dad won't answer any questions.

The four children survive as best they can in a cloud of their father's lies and clear misery, dealing with their mother's absence in their own ways. But it's always been JJ's job to cause trouble, and her sleuthing wreaks havoc in their tight-knit community.

Fourteen years on, JJ has a new life, a loving partner and a good job, but she finds herself being pulled back in to the unsolved mystery of her childhood. While pretending to have made peace with her father's dishonesty, she organises a final farewell for her mother so they can all put the past behind them. Will the tragic truth finally set them all free?

The Serpent's Skin is a gripping, literary crime novel about male power and the secrets that can haunt a family. Most of all, it's about the many ways we prove our love.

This novel ushers in Erina Reddan as a brilliant new voice in Australian fiction.

'The Serpent's Skinis a deeply satisfying book of quiet power and dignity. I loved the sparse poetry of the writing, and the punchiness and strength of this novel's voice.'
CHRISTOS TSIOLKAS, Damascus

'With The Serpent's Skin, Erina Reddan has lovingly crafted a fast-paced and timely novel tracing the consequences of a family suffocated by mystery, unquestioned power and grief. Erina pays tribute to women who refuse to bow to the secrets of the past by gifting us JJ, a tenacious spirit who not only seeks the truth no matter the cost, but uncompromisingly searches for the depth and bravery of her mother's love, of women and their truth, over any ties to patriarchal expectation. This is powerful storytelling.'
SARAH SCHMIDT, See What I Have Done

'The Serpent's Skin is a powerful, gripping read, with a cast of complex, satisfyingly original characters. Erina Reddan has written a rich, memorable Australian novel.'
GRAEME SIMSION, The Rosie Project

'A powerful and insightful novel that illuminates how secrets stay buried within families, and the bombs, sheer strength and bravery required to stand up to male power.'
SARAH MACDONALD, Holy Cow 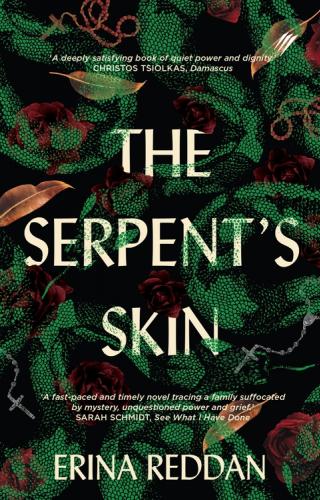