The British Admiralty's telegram arrived at Navy Office in Melbourne, the order to go to all-out war. It was coldly succinct- TOTAL GERMANY ... The war at sea had begun.

When the Second World War broke out in September 1939, the British asked Australia for help. With some misgivings, the Australian government sent five destroyers to beef up the British Royal Navy in the Mediterranean.

HMAS Vendetta, Vampire, Voyager, Stuart and Waterhen were old ships, small with worn-out engines. Their crews used to joke they were held together by string and chewing gum; when the Nazi propaganda minister Joseph Goebbels heard of them, he sneered that they were a load of scrap iron.

Yet by the middle of 1940, these destroyers were valiantly escorting troop and supply convoys, successfully hunting for submarines and indefatigably bombarding enemy coasts. Sometimes the weather could be their worst enemy - from filthy sandstorms blowing off Africa to icy gales from Europe that whipped up mountainous seas and froze the guns. Conditions on board were terrible - no showers or proper washing facilities; cramped and stinking sleeping quarters; unpleasant meals of spam and tinned sausages, often served cold in a howling squall. And always the bombing, the bombing. And the fear of submarines.

When Nazi Germany invaded Greece, the Allied armies - including Australian Divisions - reeled in retreat. The Australian ships were among those who had to rescue thousands of soldiers. Then came the Siege of Tobruk - Australian troops holding out in that small Libyan port city. The Australian destroyers ran 'the Tobruk Ferry' - bringing supplies of food, medicine and ammunition into the shattered port by night, and taking off wounded soldiers.

But the four destroyers now left were struggling, suffering from constant engine breakdowns, with crews beleaguered by two years of bombings, wild seas and the endless fear of being sunk. In late 1941 the ships were finally sent home, staggering back to Australia, proudly calling themselves the Scrap Iron Flotilla in defiance of the Goebbels' sneer. That flotilla is now an immortal part of Australian naval legend, and this is its story. 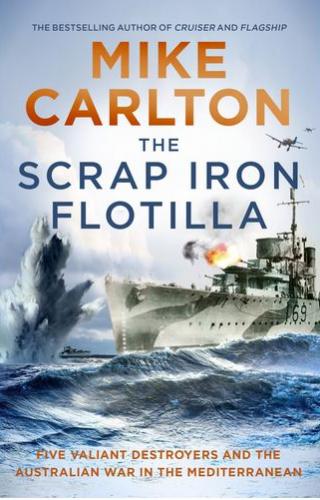