High in the Swiss Alps, a luxury hotel opens in what was once a sanatorium, but the new design can't hide the building's dark history for long . . . This is the chilling debut from the hottest new talent in crime fiction.

'The Sanatorium will keep you checking over your shoulder. This spine-tingling, atmospheric thriller has it all- an eerie Alpine setting, sharp prose, and twists you'll never see coming. A must-read.' Richard Osman

EVERYONE'S IN DANGER. ANYONE COULD BE NEXT.

An imposing, isolated hotel, high up in the Swiss Alps, is the last place Elin Warner wants to be. But she's taken time off from her job as a detective, so when she receives an invitation out of the blue to celebrate her estranged brother's recent engagement, she has no choice but to accept.

Arriving in the midst of a threatening storm, Elin immediately feels on edge. Though it's beautiful, something about the hotel, recently converted from an abandoned sanatorium, makes her nervous - as does her brother, Isaac.

And when they wake the following morning to discover his fiancee Laure has vanished without a trace, Elin's unease grows. With the storm cutting off access to and from the hotel, the longer Laure stays missing, the more the remaining guests start to panic.

'The Sanatorium is an absolutely splendid Gothic thriller.' A. J. Finn
'Wow . . . So atmospheric, clever and compulsive.' Claire Douglas
'A tense and seriously chilling page-turner.' Emma Curtis
'Everything you could want in a thriller.' Simon Lelic
'Dark, suspenseful and downright chilling, The Sanatorium is a triumph.' Sally Hepworth
'A chillingly vivid thriller in a fantastic setting.' T M Logan

***** 'Thrilling, chilling - a tingles down my spine type of read.'
***** 'Imagine a universe where Agatha Christie and Stephen King collaborated on a book.'
***** 'Sarah Pearse wastes no time in ramping up the tension and is clearly destined to be a master of this genre.' 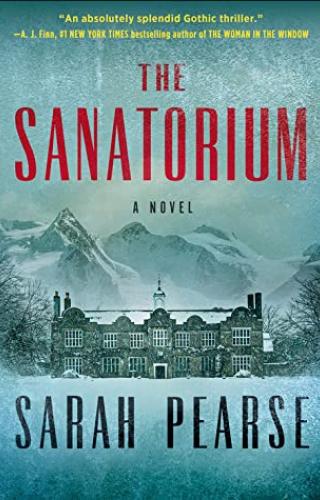