In Tasmania, John Cook is known as: 'The Keeper of the Flame'. John's renowned as one of the last of the "kerosene keepers": he spent a good part of his 26-year career in Tasmanian lighthouses tending kerosene, not electrical, lamps. He joined the lighthouse service in 1969, after a spell in the merchant marine. Far from reviling work on isolated islands such as Tasman and Maatsuyker, Australia's southernmost lighthouse, he discovered that he loved the solitude and delighted in the sense of purpose that light keeping gave him. He did two stints on Tasman, in 1969-71 and 1977, and was the head keeper on Maatsuyker for eight years.

Tasman's kerosene light was a pressure lamp fuelled by two big bottles that had to be pumped up to 75 pounds per square inch (about 516 kilopascals): "It was the equivalent of pumping up a tyre every 20 minutes," John says. "Then you had to wind up the weights - they went down the tower and turned the prism around like a big clockwork. If the weights went all the way to the bottom, the light would stop.

"The main thing was that 365 nights of the year you sat in that tower, 100 feet up, and you had to stay awake," John says of Tasman. "If you fell asleep the light would stop and then you were in trouble."

Keepers took watches around the clock, in a system similar to that on a ship. Day watches weren't a chance to slack off: standing orders required the watchkeeper to look seawards at least every half-hour and to log sightings of any vessels, and their course, in the area. "But the main thing was there was always maintenance to do," John says. "Because Mother Nature was your boss. She'd blow gutters off, that sort of thing - she was always stickin' her bib in, and you were repairin' it."

Tasman keepers also ran a herd of up to 500 sheep. They didn't have a freezer, so they'd kill and dress a sheep every fortnight. John supplemented his bulk stores, delivered every three months by the lighthouse supply vessel, with extras brought on the bi-monthly mail boat, and by keeping chooks, ducks and turkeys. "I never ran out of things to do," he says. "In my free time I used to do correspondence courses - I did navigation, diesel mechanics, business management and accounting."

In 1977, keepers left the Tasman quarters forever. "I've got such strong memories of those places with people in them, and kids' voices rattlin' around," John says. "It breaks my heart to think about those places sittin' out there empty with no lights on." 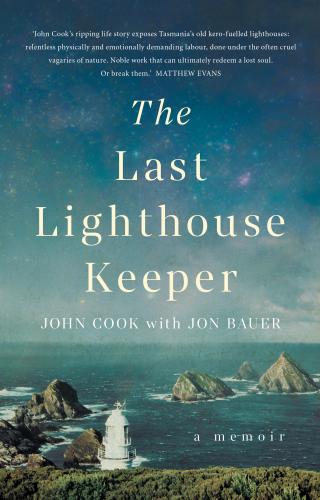