The Improbable Life of Ricky Bird

If you were charmed by The Curious Incident, laughed with Eleanor Oliphant and cried over A Man Called Ove, you will love Ricky Bird.

No one loved making forts more than Ricky. A fort was a place of safety and possibility. It shut out the world and enclosed her and Ollie within any story she wanted to tell ...

Ricky Bird loves making up stories for her brother Ollie almost as much as she loves him. The imaginary worlds she creates are wild and whimsical places full of unlimited possibilities.

Real life is another story. Ricky’s father has abandoned them and the family has moved to a bleak new neighbourhood. Worse still, her mother’s new boyfriend, Dan, has come with the furniture.

But Ricky Bird is a force to be reckoned with. As the mastermind of so many outlandish adventures, her imagination is her best weapon. As her father used to say, if you can spin a good yarn you can get on in life.

The trouble is that in the best stories characters sometimes take on a life of their own and no one, not even Ricky, is able to imagine the consequences.

Beautifully written, heartbreakingly funny and deeply moving, this book has already been compared to The Curious Incident of the Dog in the Night-time, Lost and Found, Shuggie Bain, Eleanor Oliphant is Completely Fine and A Monster Calls. But Ricky’s story is all her own – and it will stay with you long after the last page.

‘Fierce and wonderful and utterly singular, Ricky embodies the sheer joy and transformative power of storytelling.’ Kate Mildenhall, author of The Mother Fault and Skylarking

‘A wise, tender but unflinching portrait of an ordinary family and the unordinary girl at its heart. Ricky – fragile, tough, endearing and funny – is a fabulous creation. She'll walk around in my world all year, and more.’ Kristina Olsson, award-winning author of Shell and Boy, Lost 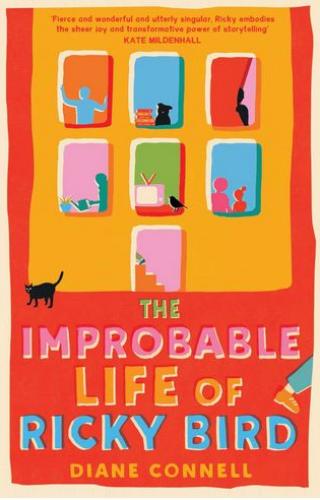