Facts and Other Lies Welcome to the Disinformation Age

Would your younger self believe the news of today? An entire city block blown up by a suicide bomber on Christmas Day because he believed phone towers spread disease. A Representative elected to the US Congress on a platform that Democrats are secretly harvesting an anti-aging chemical from the blood of abused children. Angry rioters in furs and horns overrun the Capitol in a bloody carnage of insurrection. The Prime Minister of Australia employing the wife of his friend who fronts a group the FBI has declared terrorists. A global pandemic which, even as they lie dying from it, people refuse to believe exists.

Many who sat in shocked disbelief as these events beamed around the world asked the same question: 'How did we get here?' For those rioters, it was the culmination of a journey of online radicalisation that began with the weaponisation of disinformation by their political leaders and outrageously biased 'news' commentators.

Facts and Other Lies puts fake news in its historical context and explains how disinformation has fractured society, even threatening democracy itself. It explains why disinformation is so potent and so hard to stop, and what we can do to help prevent its proliferation in Australia - where politicians and shock jocks are already operating from the same dark playbook. It outlines how anyone can defuse disinformation in the home, office or pub, or wherever the deluded gather to spread their nonsense. Be prepared!

'This is a timely account of a growing malignancy affecting all modern democracies'
Kevin Rudd, former Prime Minister of Australia

'Ed Coper keenly explains how lying has been normalised in right wing media - both social and mainstream. The Trump-inspired attack on the US Capitol on 6 January is just one consequence. Coper deftly shows us what is to be done and offers some real solutions to restore trust in public discourse.'
Malcolm Turnbull, former Prime Minister of Australia

'Fascinating and terrifying . . . illuminates so much about humans and social media'
Bri Lee, author of Who Gets to Be Smart

'Read this book if you want to save democracy'
Wayne Swan, former Deputy Prime Minister of Australia

'Essential reading for anyone wanting to cut through the nonsense and get to the truth'
Eason Jordan, former Chief News Executive, CNN

'We live in a world that unfolds at a pace, and with the violent twists and turns in the plot, of a thriller. This book captures the intensity of our politics and connects it to the science of misinformation . . . a great read'
Professor Stephan Lewandowsky, Chair in Cognitive Psychology, University of Bristol 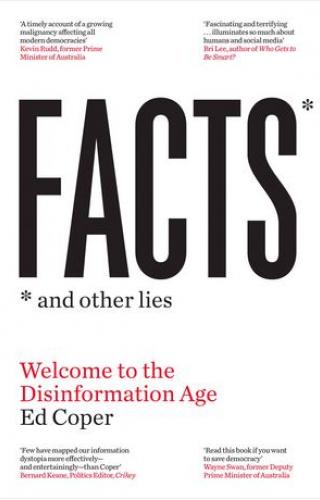