Katherine Collette's much-anticipated and hilarious follow-up to The Helpline, the debut Aussie novel that charmed the world

Frances quite honestly isn't that excited about the SpeechMakers annual national conference and public-speaking competition. What she's excited about (relatively speaking) is that this year there's a major prize. Frances has a few small problems, and forty thousand dollars would go a long way to sorting them out.

Keith is Frances's probably-ex-mentor, it's hard to tell since she's not talking to him, and he disapproves of the prize money. He thinks SpeechMakers should be about self-improvement, not self-enrichment. He wants to win the competition, though. He thinks it might help the situation with his wife Linda.

Neil doesn't care about the competition at all but Judy, his mother and coach, does, so.

Actually, what the hell is Rebecca doing here? Rebecca belongs to Frances's past, not her present. And certainly not her (hopefully) less-disastrous future.

Katherine Collette, author of the hilarious The Helpline, returns with another sharply observed comedy of manners and a cast of loveable underachievers, headed for self-improvement despite themselves. 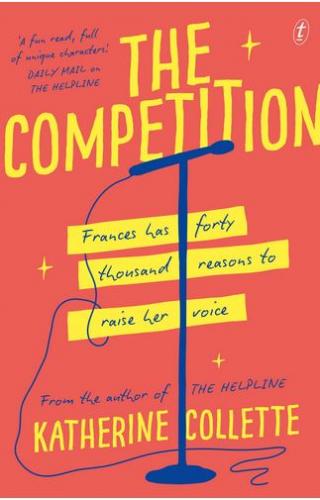