An extraordinary novel from a 'remarkable' Booker Prize-winning author who has 'constructed her own novelistic form' (James Wood, The New Yorker) that follows one young Omani woman as she builds a life for herself in Britain and reflects on the relationships that have made her.

Zuhur, an Omani student at a British university, is caught between the past and the present. As she attempts to form friendships and assimilate in Britain, she can’t help but ruminate on the relationships that have been central to her life. Most prominent is her strong emotional bond with Bint Amir, a woman she always thought of as her grandmother, who passed away just after Zuhur left the Arabian Peninsula.

As the historical narrative of Bint Amir’s challenged circumstances unfurls in captivating fragments, so too does Zuhur’s isolated and unfulfilled present, one narrative segueing into another as time slips, and dreams mingle with memories.

The eagerly awaited new novel by the winner of the Man Booker International Prize, Bitter Orange Tree is a profound exploration of social status, wealth, desire, and female agency. It presents a mosaic portrait of one young woman’s attempt to understand the roots she has grown from, and to envisage an adulthood in which her own power and happiness might find the freedom necessary to bear fruit and flourish.

'A rich and powerful novel that showcases the interplay between memory and emigration and the precariousness of sisterhood in a world that encourages the domination of men, told in a sumptuous and incisive translation by Marilyn Booth.' Jennifer Croft, author of Homesick and co-winner with Olga Tokarczuk of The International Booker Prize for Flights

'Jokha Alharthi is a remarkable writer for whom my admiration grows with each work. Watching the lives of Zuhour and Bint Amir unfurl within Bitter Orange Tree was a pleasure, and Alharthi's prose in the capable hands of translator Marilyn Booth is as clear and refreshing as a cool glass of water.' Sara Nović, author of America is Immigrants

'Lyrical, elegiac, and poignant, a transcending read – like sitting by an open window at dusk as memories slip in, one by one, each radiating with life.' Akil Kumarasamy, author of Half Gods 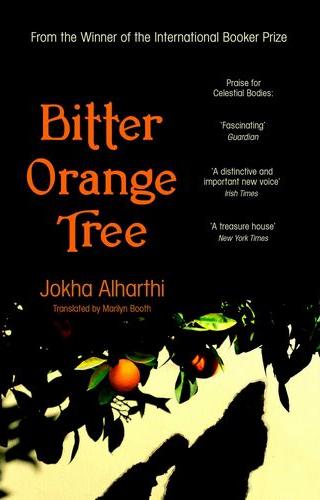